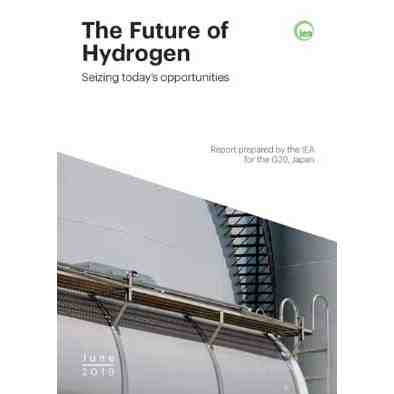 The International Energy Agency IEA released a major report on the potential for hydrogen in June 2019. The report is available for download using the button under the photo of the report cover to the left.

OPEC and IEA say prices will stay lower for longer

The article below appeared in the September 14th, 2016 edition of Natural Gas Daily, a specialist newsletter published by Interfax, focussed on the global natural gas and LNG industry.

The International Energy Agency (IEA) has said that the pace of global oil demand growth is dropping more quickly than initially predicted. In its latest monthly outlook, the agency lowered its forecast for oil demand growth in 2016 by 100,000 barrels per day, to 1.3 million b/d. It forecast the growth rate would be even lower in 2017, at 1.2 million b/d.
With OPEC producers pumping at close to record-high levels, the stock overhang that has stymied oil price rallies in recent months looks set to continue. Non-OPEC production has been dropping because of low prices, but not by enough to eat into bloated inventories. The IEA estimated that oil inventories in OECD countries hit a new record high in July, of 3.1 billion barrels, a rise of 32.5 million bbl from the previous month.
Oil prices rallied from four-month lows of around $41.50/bbl in early August to a high of $51.22/bbl on 19 August as peak summer demand for oil for transport kicked in. But the rally has faltered, and Brent futures currently stand at around $47.50/bbl. The northern hemisphere summer is usually a time when more oil is consumed – especially in the United States, where motorists guzzle nearly 10% of the oil used globally.
The IEA said OPEC crude production nudged higher in August, to 33.47 million b/d. This was 930,000 b/d above levels seen earlier in the year and was led by Middle East producers pumping at full throttle. The IEA said Kuwait and the United Arab Emirates hit their highest-ever output and Iraq also increased supplies.
Saudi Arabia and Iran have each raised their output by more than 1 million b/d since late 2014, when OPEC shifted its strategy to defend its market share rather than protecting prices. Saudi output has almost reached a historic peak while Iran has also reached a post-sanctions high. As Saudi Arabia had planned, the surge in its production has stolen market share from US shale producers. However, the slowdown in US shale production has been slower than expected as a result of lower costs and higher well productivity.
In its latest monthly report, which was issued on Monday, OPEC said that losses in non-OPEC supply would be less than expected in 2016, falling by 610,000 b/d rather than the 800,000 b/d decline it predicted earlier in the year. Additionally, it reported that non-OPEC production in 2017 would be 200,000 b/d higher than 2016 levels and that OPEC production of NGLs would rise by 150,000 b/d in 2017, to 6.43 million b/d. The OPEC report said third-party sources estimated its members pumped 33.24 million b/d in August, close to the recent production peaks.
The IEA’s own supply estimates are broadly similar to those of the oil cartel. The IEA expects non-OPEC supply to drop by 840,000 b/d this year, with high-cost producers hit particularly hard. However, growth will resume in 2017, with the IEA forecasting a 380,000 b/d year-on-year increase in oil production. Output gains are expected because North Sea fields that were shut for summer maintenance have now been brought back to full production, while Kazakhstan’s Kashagan field will also start producing again after extensive repairs. Eni has forecast production will recover to 360,000 b/d in 2017, above the level anticipated by the Kazakh government, the Financial Times reported.
“Supply will continue to outpace demand at least through the first half of next year,” the IEA said. “Global inventories will continue to grow […] As for the markets’ return to balance – it looks like we may have to wait a while longer.”

The International Energy Agency said the world needs $48 trillion in investment to meet its energy needs to 2035.
In a special report issued June 3, the IEA said today’s annual investment in energy supply of $1.6 trillion needs to rise steadily over the coming decades towards $2 trillion to meeting soaring energy demand.
Meanwhile, annual spending on energy efficiency, measured against a 2012 baseline, needs to rise from $130 billion today to more than $550 billion by 2035.
Accurate pricing is key to making sure that investment gets to where it’s needed, according to the report.
IEA Maria van der Hoeven said: “There is a real risk of shortfalls, with knock-on effects on regional or global energy security, as well as the risk that investments are misdirected because environmental impacts are not properly reflected in prices.”
Of the cumulative global investment bill to 2035 of $48 trillion in the report’s main scenario, around $40 trillion is in energy supply and the remainder in energy efficiency. Of the investment in energy supply, $23 trillion is in fossil fuel extraction, transport and oil refining; almost $10 trillion is in power generation, of which low-carbon technologies – renewables ($6 trillion) and nuclear ($1 trillion) – make up the lion’s share; and a further $7 trillion in transmission and distribution.
More than half of the energy-supply investment is needed just to keep production at today’s levels, that is, to compensate for declining oil and gas fields and to replace power plants and other equipment that reach the end of their productive life.
The $8 trillion of investment in energy efficiency is concentrated in the main consuming markets, the European Union, North America and China: 90% is spent in the transport and buildings sectors.